Overseas exhibition is an important way for enterprises to establish an international image and explore the international market. In recent years, due to the lack of understanding of overseas intellectual property protection by domestic enterprises, enterprises often encounter intellectual property judicial and administrative enforcement investigations during the “go global” process, among which the EU exhibition survey is quite representative.

I. Cases of Chinese enterprises "sniped" at international exhibitions

SISVEL, an Italian patent management enterprise, is specialized in patent licensing, patent management and other activities on behalf of patentees. Every year, the enterprise analyzes all the information of exhibitors attending large exhibitions such as CeBIT, CES, IFA, etc., and comes up with a list of manufacturers with the possibility of illegal use of patents managed by them, and submits the list to the court for mandatory enforcement.  From March 2007 to September 2008, SISVEL launched three inspections for exhibitors at CeBIT and IFA, the booths of many domestic enterprises such as Newman, Shenzhen Mele Digital, Haier and Hisense inspected and confiscated, many enterprises having to be “closed” during the inspection, which has seriously affected the international reputation of brands.

Take CeBIT (Communication and Information Technology Expo) on March 15, 2007 as an example, in just a few hours following the start of the exhibition, digital exhibition products of 12 domestic manufacturers, including Newman and Shenzhen Mele (involved products including MP3, DVD players, car navigation systems and other electronic products supporting MP3 playback), were allegedly infringing on an MP3 patent of SISVEL with the result of being seized by German Customs. Shenzhen Mele Digital was forced to directly announce their exhibition was “closed” because all its exhibits were seized. 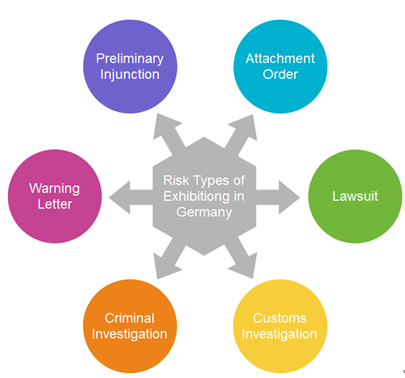 Preliminary injunction: A temporary remedy that does not require complicated application procedures. The conditions for issuance mainly include: (1) the right holder applies for a preliminary injunction to the local court that has jurisdiction over the place where the exhibition is held, which means the temporary procedure starts then; (2) the rights of the right holder (invention, utility model, appearance design, trademark, Copyright) shall be valid in Germany; (3) the situation is urgent; (4) the right holder can prove to the court that the infringement is true.

Attachment Order: usually issued at the same time as the preliminary injunction. It is mainly for the deposit of assets or property seizures for the expenses of the follow-up process when the exhibitors have no property to implement, and the Sino-German mutual implementation agreement. Law enforcement agencies issuing attachment order have the right to seize exhibits.

Criminal investigation: the German criminal law also stipulates the criminal responsibility of the infringer. Anyone who implements a patent without the permission of the right holder may be sentenced to fixed-term imprisonment of not more than three years or a fine. For patent infringement on a commercial scale, it may be punishable by imprisonment for up to five years or fine. In addition, the items investigated may be confiscated.

Customs investigation: German Customs has the right of law enforcement to seize products allegedly infringing patents from foreign countries when handling customs clearance procedures.  The law enforcement procedure only requires the right holder to file an application, and the customs can seize or terminate the release of suspected infringement items according to the application. It should be noted that customs enforcement is not a substantive determination and can usually be seized as long as the customs believes that the item may be suspected of infringement.

Lawsuit: It is the process in which the right holder officially files a lawsuit in writing to the court of the jurisdiction of the patent infringement case and starts the formal lawsuit. The binding effect of the lawsuit is not only during the exhibition, but also outside the exhibition period. 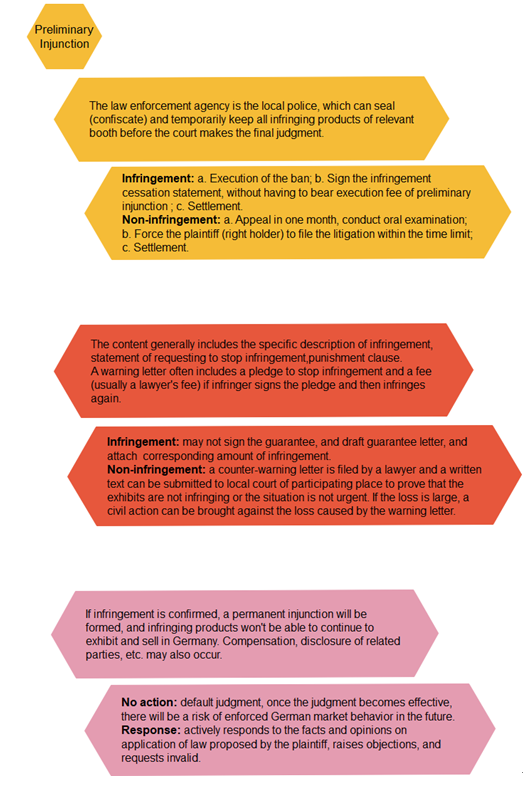 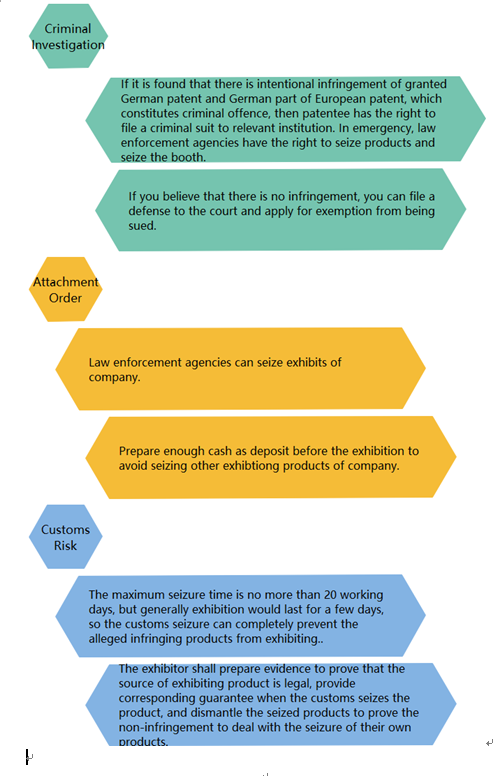 III. Necessary preparation before participation of the exhibition 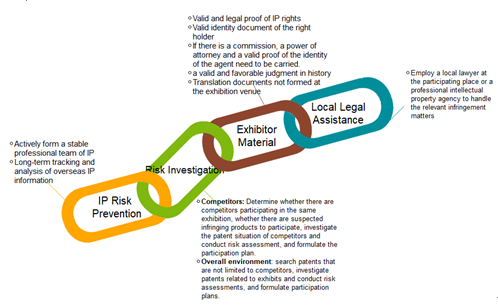 In order to prevent the right holders or competitors from obtaining the detailed information of products at the exhibition to judge whether the exhibitors infringe, the enterprise should raise the awareness of prevention, preventing relevant materials from being disclosed in the exhibition, which inadvertently provides the right holders with the evidence of applying for preliminary injunction and other restrictions. In addition, the following points should also be noted:

In short, intellectual property is a "double-edged sword". If an enterprise has a strong awareness of intellectual property and makes good use of this sharp edge under the guidance of legal professionals, it can consolidate the enterprise’s own foundation, maintaining effective competitive advantages to remain invincible in the fierce market competition environment.