Our colleagues have previously written on the difficulty of registering non-traditional marks with the China Trademark Office – 3D shapes, sound and color combination marks have not been universally accepted, and although provisions for their registration are outlined in Article 8 of the Trademark Law, many have seen rejections when registering. Generally, a truly widespread recognition among the public must be achieved by a non-traditional mark; its distinctiveness must also be proved to the court.

China’s livestreaming craze is perhaps best demonstrated by Li Jiaqi, or Austin Li, a livestreamer with a fanbase of over 40 million on Douyin (China’s version of TikTok) who endorses (and criticizes) cosmetic products to his audience. Many say his endorsing slogan “Oh my god, 买它，买它” (OMG, buy it, buy it!) is his trademark – but China’s Trademark Office disagrees. Mr. Li’s company, Shanghai Chengjia Electronic Commerce Co., Ltd., filed a registration application on April 7, 2020 for a sound mark in Class 35, with the following description: “This sound trademark is based on the well-known online anchor Li Jiaqi's voice, saying "Oh my god, buy it, buy it!" The speech is fast, bold and powerful, and highly emotional, and the voice has a strong personal style and recognition.”. After a round of additions to the original application, it was rejected by CTMO on December 4, 2020, and the company filed for a review of refusal, which is currently in progress. 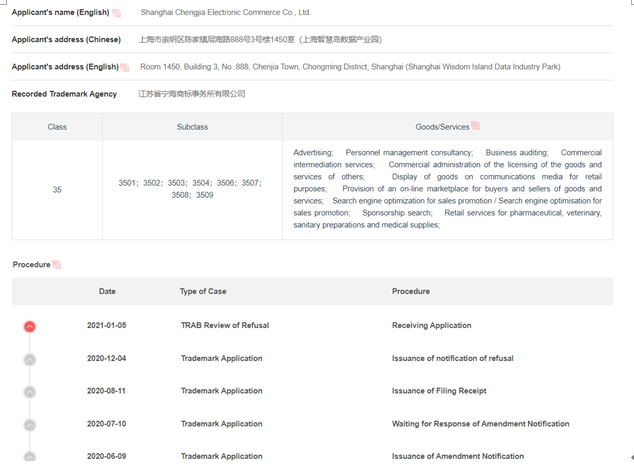 According to provisions laid out for sound trademark registration, the sound must be distinctive and must not be similar to national anthems of any country; must not reflect the characters of the designated goods or services only (eg, a barking dog for canine products); nor be too simple or too common (eg, a single tune or a tune commonly used music in the industry). Currently, very few registered sound trademarks feature a human voice, which could be another obstacle in an already difficult journey of registration of this slogan. It took four years for China’s tech giant Tencent to register a jingle heard by 700 million users of QQ, Tencent’s messaging app. Is the livestreamer’s 40 million followers not widespread enough? Although it seems to fit into the criteria outlined for registration – the sound is not reminiscent of a national anthem, not descriptive, and uncommon, the CTMO nevertheless has their reservations about allowing this sound mark to be registered.

Austin Li’s power over a large group of Chinese consumers can sway the sales of many brands – his negative comments about a recently launched line of lipsticks by Hermes dampened the sales of the luxury brand in China – and if his sound trademark registration succeeds, it will be a confirmation of the shifting of the Chinese market and its sales channels. Without a registered sound mark, Mr. Li has no recourse over anyone using his slogan to encourage consumers to buy a product, thus misleading them to believe that the popular online personality has endorsed the product. Whether these and other arguments will hold up in the ongoing proceedings remains to be seen – stay tuned!