Agriculture is an important part of the Chinese economy, and food plays an important role in Chinese history. At the same time, agricultural chemicals and  fertilizers also affect our daily life, if trademark is registered improperly over these goods, it may lead to the abuse of trademark and then affect the safety of the foods we consume daily. House & Garden, Inc. is a company from USA and is engaged in provisions of agricultural chemicals.  It has acquired high reputation and influence among Chinese consumers with its high-quality products. However, as House & Garden is getting famous, their mark is becoming target of some trademark squatters over goods “Fertilizers”. House & Garden won in the opposition action against a published mark.

Kangxin Partners, P.C., acting on behalf of House & Garden, Inc. (“the opponent” hereunder), filed an opposition action against the trademark “

Kangxin Partners, P.C., acting on behalf of House & Garden, Inc. (“the opponent” hereunder), filed an opposition action against the trademark “

Below are details of the opposed mark and the cited mark: 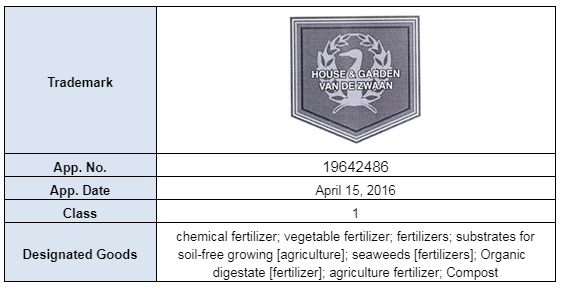 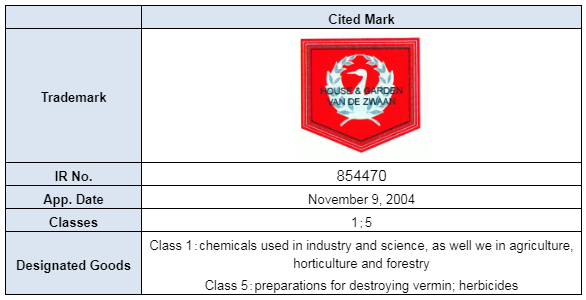 (IR No. 854470).  The designated items “chemical fertilizer, etc.” have strong connections with those of the cited mark “agriculture chemicals, electric.”  Thus, the opposed mark constitutes a similar mark over similar goods with the cited mark.

2.    The opponent is the real owner of the “House & Garden” mark.  The cited mark has acquired high reputation through long-term use and wide promotion.

in China.  Thus, registration of the opposed mark will easily confuse the relevant consumers regarding the source of goods.

Thus, the opposed trademark was rejected for registration.