We, Kangxin Partners, P.C., filed an opposition action against the trademark, FISHE (No. 51896816 in Class 25) (“the opposed mark”) on behalf of FYSHE LIMITED (“Client”) on October 08, 2021.  The National Intellectual Property Administration, PRC (“CNIPA”) examined the case and decided to reject the opposed mark for registration.

The client registered the trademarks “FYSHE” in mainland, China over different goods.  The client was of the opinion that the opposed mark is a “similar mark over similar goods” compared with their prior registered trademarks.  Upon communication with client, we were entrusted to file opposition against this trademark. 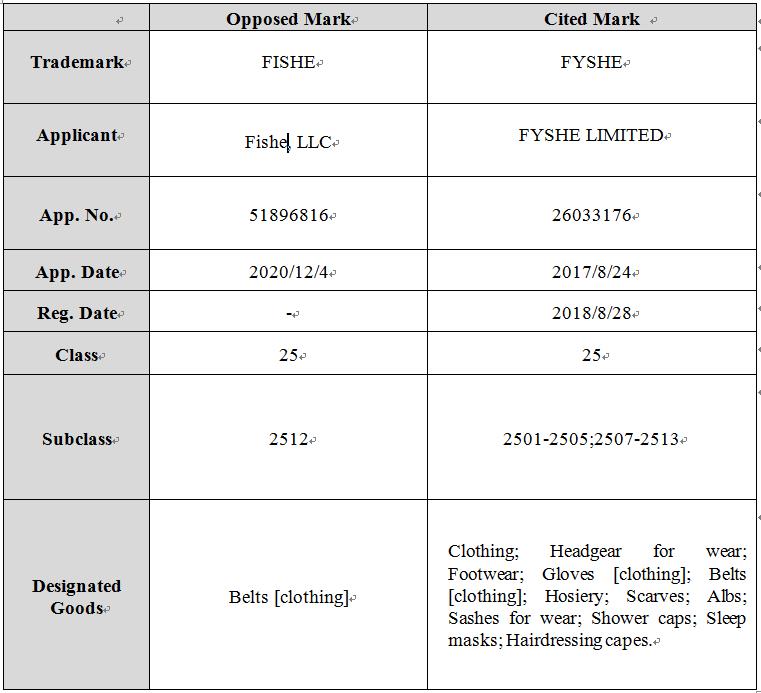 In the opposition, we mainly argued that

1) The opposed mark and the client's prior trademark constitute “similar marks over similar goods”, in violation of Article 30 of the PRC Trademark Law;

2)  The client's prior trademark has enjoyed certain reputation in China through the use.  The registration and use of the opposed mark over same or similar goods will easily cause confusion among relevant public.

On July 22, 2022, the CNIPA issued the decision: The opposed mark is similar to the opponent’s cited mark in respect of letter composition, pronunciation and overall appearance, and the goods of both sides are similar in respect of functions and use purposes.  Thus, the marks are "similar marks over similar goods", and coexistence of the marks may cause confusion and misleading to consumers. Therefore, the opposed mark is in violation of Article 30 of Chinese Trademark Law.

With respect to issue 1, the opposed mark is highly similar to the cited mark, because they share the letters “F*SHE”; although the second letters in the marks are different, the marks as a whole pronounce similar.

With respect to issue 2, the goods of the opposed mark are similar to those of the cited mark in accordance with the Chinese Classification of Goods and Services.

The opposition procedure is set up to make up for the omissions of examiners during the examination and other situations, so as to ensure that the opponent's rights are protected.  That's what this case illustrates.