Case Study of Invalidation Action against the Trademark OTISCHINDLER
date: 2021-12-21

We, Kangxin Partners, P.C., filed an invalidation action against the trademark,

(No. 12857059 in Class 7) (“the disputed mark”) on behalf of Otis Elevator Company (“Client”) on December 7, 2017.  The National Intellectual Property Administration, PRC (“CNIPA”) examined the case and decided to declare the disputed mark’s registration invalid.

Otis Elevator Company is the owner of famous brand “OTIS” for elevators, lifting apparatus and other elevating apparatus. Otis Elevator Company registered the trademark “OTIS” in several classes in mainland China, and the trademark “OTIS” over the goods “elevators, lifting apparatus” enjoys high reputation amongst relevant public.  The client was of the opinion that the disputed mark is a “similar mark over similar goods” with the client’s mark“

under registration No. 1139171.  Upon communication with client, we were entrusted to file invalidation against this trademark. 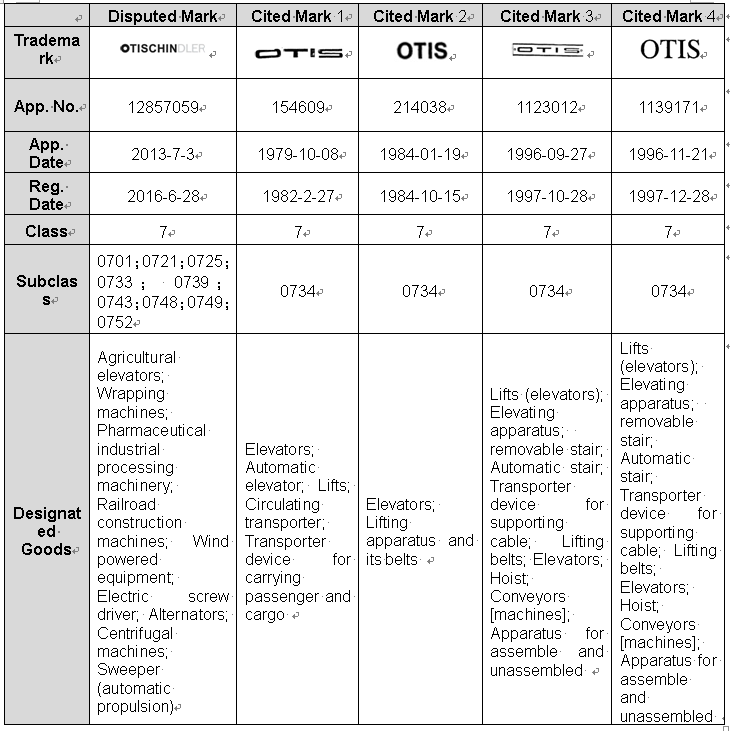 We filed invalidation action against the disputed mark on December 7, 2017.  In the invalidation, we mainly argued that:

1)     The disputed mark is “similar marks over similar goods” with compared to Cited Marks 1-4, in violation of Article 30 of the PRC Trademark Law;

2)     The disputed mark is a copy and an imitation of the client’s well-known mark,

(No. 214038), which will easily mislead the public and damage the client’s interests, in violation of Article 13.3 of the PRC Trademark Law;

3)     The registration of the disputed mark is deceptive, it will mislead the consumers on the quality, origin of the goods;

4)     Registration of the disputed mark is in improper means, which violates the principle of good faith and causes negative social influences.

With respect to issue 2, although the goods of the disputed mark are not similar to those of the cited marks in accordance with the Chinese Classification of Goods and Services, because they are in different subclasses.  However, we agued from the nature and characteristics of the goods, emphasized that the goods are closely related in respect to function, use purpose, manufacturing department, sales channel and target consumers.  We also illustrated that when consumers purchase products, they will purchase goods with good quality, since the client’s goods are excellent, consumer is more likely to purchase the disputed mark’s goods.  Moreover, a international big company like the client, it is quite reasonable to have several products lines, so the consumers may easily think that the disputed mark and its goods are one of the client’s brand and products lines, so confuse the origin of the goods.   Therefore, the disputed mark’s goods should be considered similar to the goods of the cited marks.

On December 14, 2018, the CNIPA issued the decision and decided to declare the disputed mark invalid.