(No.35668065 in Class 25) (“the opposed mark”) on behalf of THE ARSENAL FOOTBALL CLUB PUBLIC LIMITED COMPANY (“Client”) on May 20, 2020.  The National Intellectual Property Administration, PRC (“CNIPA”) examined the case and decided to rejected the opposed mark for registration.

THE ARSENAL FOOTBALL CLUB PUBLIC LIMITED COMPANY is the famous football club, it is also the owner of the brand “ARSENAL.” After more than 100 years hard work, ARSENAL football club made a great performance.  It has been the one of most famous and oldest football club in the world, and it is well-known as “GUNNERS”.  Thus, the client and the mark “GUNNERS” enjoy high reputation among relevant public. The client registered the trademark “GUNNERS” in China over different goods. The client was of the opinion that the opposed mark is a “similar mark over similar goods” with the client’s mark

” under international registration No.1230152.  Upon communication with client, we were entrusted to file opposition against this trademark. 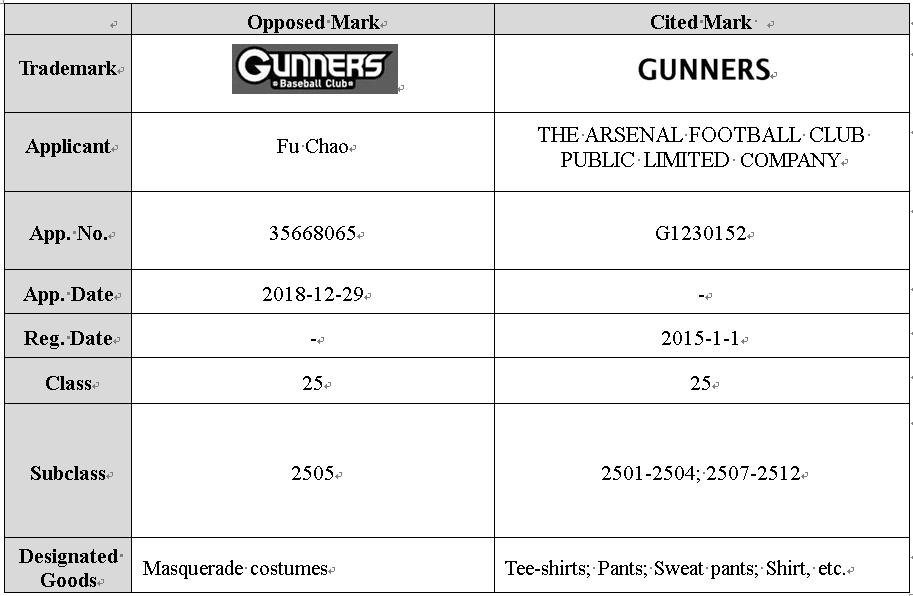 In the opposition, we mainly argued that:

1)        The opposed mark is “similar marks over similar goods” with compared to cited mark, in violation of Article 30 of the PRC Trademark Law;

2)        Based on the high reputation of the cited mark, the registration and use of the opposed mark over similar same or similar goods will easily cause confusion among relevant public;

3)        The registration of the opposed mark is deceptive, it will mislead the consumers on the quality, origin of the goods;

4)        The opposed mark was filed in bad-faith, which violates the principle of good faith.

On May 19, 2021, the CNIPA issued the decision: The distinctive part of the opposed mark “GUNNERS” is similar to the opponent’s cited mark for “

in respect of letter composition, pronunciation and meaning, and the goods of both sides are similar in respect of functions and use purposes.  Thus, the marks are similar marks over similar goods, and coexistence of the marks may cause confusion and misleading to consumers.  Therefore, the opposed mark is in violation of Article 30 of Chinese Trademark Law.

With respect to issue 1, the opposed mark is highly similar to the cited mark, because they share the distinctive word “GUNNERS”; although the opposed mark also contains the words “BASEBALL CLUB”, it bears weak distinctness when used over the goods in Class 25.  In addition, the client is the famous football club, thus, the existence of the words “BASEBALL CLUB” in the opposed mark makes it more similar to the cited mark, so the coexistence of the marks will easily cause confusion among relevant public.

With respect to issue 2, although the goods of the opposed mark are not similar to those of the cited mark in accordance with the Chinese Classification of Goods and Services as they are in different subclasses, we argued from the nature and characteristics of the goods, emphasized that the goods are closely related in respect to function, use purpose, manufacturing department, sales channel and target consumers, because both of the opposed designated goods “Masquerade costumes” and the cited mark’s goods “Tee-shirts; Pants; Sweat pants; Shirt, etc.” are clothing.  We also illustrated that when consumers purchase products, they will purchase goods with good quality; since the client’s mark enjoys high reputation and the goods are excellent, consumer is more likely to purchase the opposed mark’s goods by mistakenly think that there are certain connection with the parties’ marks.  Moreover, as an international big company likes the client, it is quite reasonable to have several products lines, so the consumers may easily think that the opposed mark and its goods are one of the client’s brand and products lines, so it is easy for them to confuse the origin of the goods.   Therefore, the opposed mark’s goods should be considered similar to the goods of the cited mark.